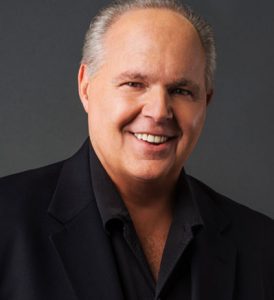 Rush Limbaugh is an American entertainer, radio talk show host, writer, and conservative political commentator. His talk show, featuring his ongoing format of political commentary and listener calls, is one of the most-listened-to talk shows in the US. Since he was 16, Limbaugh has worked a series of disc jockey jobs. His talk show began in 1984 at Sacramento, California radio station KFBK, featuring his ongoing format of political commentary and listener calls. In 1988, Limbaugh began broadcasting his show nationally from radio station WABC in New York City, and the show’s flagship station became WOR in 2014. He currently resides in Palm Beach, Florida, where he broadcasts The Rush Limbaugh Show. According to December 2015 estimates by Talkers Magazine, Rush Limbaugh has a cume (cumulative weekly audience) of around 13.25 million unique listeners (listening for at least five minutes), making it the most listened-to talk-radio program in the US. In the 1990s, Limbaugh’s books The Way Things Ought to Be (1992) and See, I Told You So (1993) made The New York Times Best Seller list. In his books and on his show, Limbaugh frequently criticizes what he regards as liberal policies and politicians, as well as what he perceives as a pervasive liberal bias in major U.S. media. Limbaugh is among the highest paid people in U.S. media, signing a contract in 2008 for $400 million through 2016. In 2015, Forbes listed his earnings at $79 million for the previous 12 months, and ranked him the 11th highest earning celebrity in the world.